Today we’re looking at the Ogdensburg Public Library located at 313 Washington Street in the downtown historic section of the Ogdensburg, New York. Behind the library is a green open space called Library Park, which is the home to the Spirit of Liberty monument that was installed in 1905. 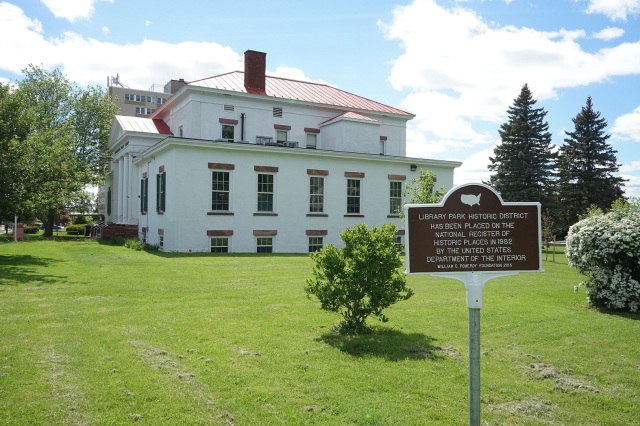 The Ogdensburg Library as an organization dates back to 1828 and throughout the years moved around the city and never had a permanent home. That was the case until the 1890’s, through the efforts of Dr. Fred Van Dusen, the Ogdensburg Public Library saw some significant changes that would have lasting effects to the library’s establishment in the city. Changes included getting the library officially incorporated by the State Board of Regents in 1891 and eventually getting a permanent home for the library: the Clark House at 311 Washington Street.

The Clark House was a private residence built in 1888 for George C. Clark, a New York banker, who has used the house as a summer residence for his family. Prior to construction of the new Clark summer home, the property was originally the location of the Greek Revival home of Joseph Rosseel (also spelled Roselle) stood. Rosseel had been the land agent to David Parish one of the early landowners in St. Lawrence County. Rosseel employed Joseph Jacques Ramee to design his Greek Revival home in 1810. When Clark purchased the property, he had the old house demolished to build his Queen Anne home. By 1895, Clark was beginning to have second thoughts. Given the distance from Ogdensburg to New York City, Clark determined it would be better to have a summer residence closer to the city. Clark offered his home and entire block for the new home of the library for $35,000 ($10,000 of which Clark donated). The home was estimated to be worth $125,000. In addition, Clark gave his dock property (land between his residence and the streets) to be used as a park space in the city- this is today’s Riverside Park in Ogdensburg.

A side note about the Clark House, different sources say slightly different things about the house. One article reporting on the fire dated November 25, 1921 (Ogdensburg Republican Journal) said that Clark, “greatly overhauled and renovated,” the original 1812 structure for his summer residence. While other sources say that Clark completely demolished the older building to construct a completely new home. It’s unclear why there is a discrepancy in the information on what exactly happened but it would be safe to say that if any portion of the library is the original 1812 building still exists it would be difficult to determine given the level of renovations through the years and the 1921 fire.

In early 1921, funding was given from the estate of George Hall and John C. Howard to be used to complete needed renovations of the library’s main building and the library’s annex- George Hall’s house across the street. John West was hired as the contractor for the renovations, which were coming along fine and would have been completed by February of 1922 but a fire broke out on November 24, 1921 destroying most of the interior of the library.

Luckily, all of the collections were safe. The books, records, Frederick Remington paintings, and original bronzes had been placed at either the George Hall residence or in a massive safe in the library’s basement.

The fire was discovered around 7 am by a passerby on the way to the local market. The fire department was alerted immediately and the local firefighters in their response to the blaze, were assisted by sailors from the USS Chillicothe, which was moored at Riverside Park. They weren’t’ successful in putting the fire completely out until noon of that day.

John Wert originally estimated the damages could be anywhere between $25,000-$50,000, and the entire building was gutted. A few weeks later, the damages were able to be assessed and the losses only totaled $15,000, which was covered by insurance. The cause of the fire was determined to be an overheated hot air furnace. The flooring and the roof completely burned but the walls somehow remained in good shape, allowing reconstruction to still be possible. The reconstruction work that occurred resulted in the library that we see today- it was rebuilt as a replica of the old 1812 Rossell Mansion.

Associated with the public library is Library Park, which is home to the Spirit of Liberty, a sculpture by local Sally James Farnham. The Park is behind the library and was laid out in 1903- the area was also part of the Clark Property.

When the library acquired the Clark Mansion in 1895, it also acquired a fantastic open space that was planned out to be a park for the city. Plans were eventually created in 1903 and not finally completed until the following year. The plans for the landscaping of the Library Park as it was called, were drafted by Arnold E. Smith and Dr. Dusen assisted in getting the authorization to complete the layout around the library.

The Commercial Advertiser on July 5, 1904 reported that the park plans consisted of, “a horse-shoe or semi-circle of, prominent, outlining, the concave facing the river, the library building at the apex, forming the background. The fountain, as now located, the central figure; the proposed soldier’s monument about one hundred feet westerly there- from and a little lower down…” In addition to this description, the park was to have trees throughout the park such as cherry, Persian lilac, and hydrangea and principal walkways were to be laid out from corner to corner of the park, crossing at the center in front of the fountain. 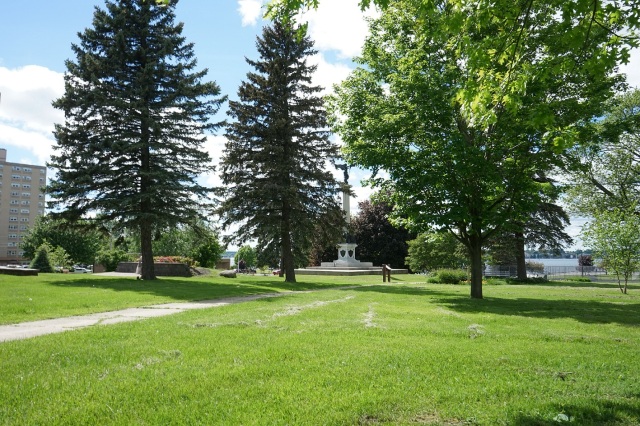 In the same year that finishing touches were made to Library Park, Sally James Farnahm, won her first commission via competition- a Union soldier monument to be placed in the park. Sally had submitted to models to the monument committee of Ransom Post, GAR, “Defenders of the Flag” and the “Spirit of Liberty.” Funding for the monument came from a number of sources: Mr. and Mrs. George Hall, Swe-Kat-Si Chapter GAR, Fortieth Separate Company, Ransom Post GAR, Post Card Subscriptions, and even from Sally Farnham herself.

The Spirit of Liberty:

The Spirit of Liberty was installed at the Park in 1905. The city of Ogdensburg had held a competition for a Civil Ware monument for the Park for the soldiers and sailors from the town of Oswegatchie who died during the Civil War. Sally James Farnham submitted two different designs: Defenders of the Flag and the Spirit of Liberty. Out of 15 submissions, Sally’s Spirt of Liberty was chosen by the City. 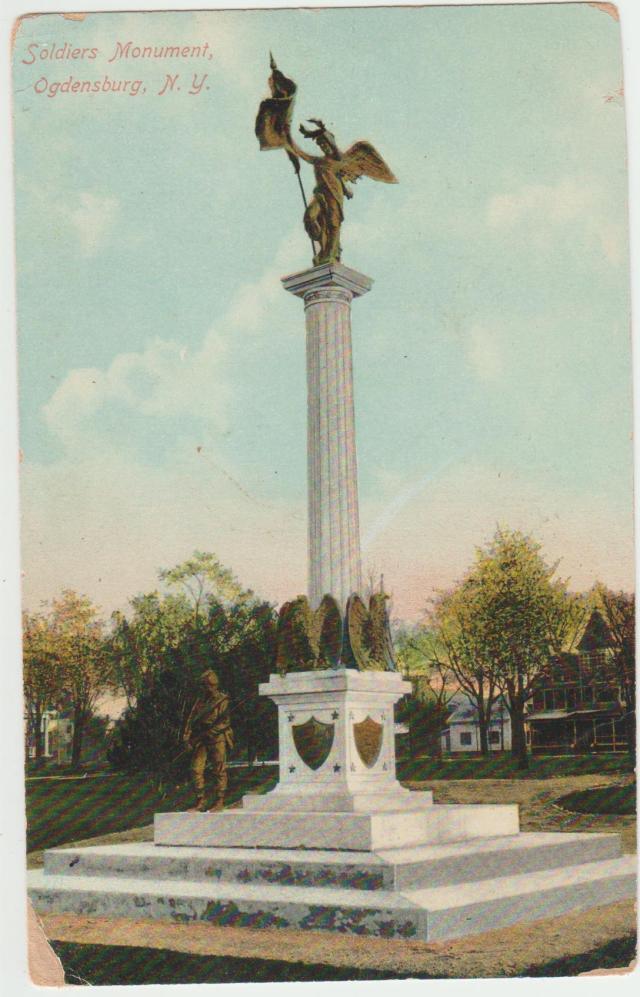 Sally was born in 1869.  Her mother passed away when she was 10 years old, for this reason Sally was very close to her father and they traveled around the world. While Sally wasn’t formally educated in an art medium, she was exposed to art throughout her travels with her father to France, Norway, Scotland, and even Japan. In 1896, Sally married George Paulding Farnham, who was the design director for jewelry and silver at Tiffany & Co. Yes, THE Tiffany & Co.

Sally’s first experience working with modeling clay was the result of both a personal tragedy- the death of her father- and a serious illness that left her bedridden. Her husband, George, during this time brought home clay for her to work with, hoping it would help improve her spirits. Sally greatly became interested in working with clay as an art medium- she was guided partly by her husband, who was a member of the National Sculpture Society, and more importantly by Frederick Remington, who was another native of Ogdensburg and a family friend of Sally’s. Remington supported and encouraged Sally’s artwork up until his death in 1909. Oddly enough Remington lived in the house across the street from the building that is the city’s public library. It’s fitting that Sally’s sculpture not only stands high in her hometown but also in view of her friend and mentor’s old house. The other unique thing about Sally James Farnham is that she was one of the first women to successfully compete for national sculpture commissions, like the one for the Ogdensburg Civil War monument.

In competing for the Ogdensburg Commission, Sally had a strong connection to wanting to design the city’s Civil War monument, not only was she obviously a local to the city but her father was Col. Edward C. James who commanded the 106th NY Volunteers during the war. Her winning design features a winged Victory with laurel wreath and flag atop of a 35-foot granite column and pedestal (the granite is from the quarries of Barre, Vermont). The pedestal features four bronze war eagles and shields. Originally, the base also had a life-sized bronze soldier, it has since been removed due to damages caused by vandalism. The monument was officially dedicated on August 23, 1905 and was attended by almost 20,000 people including the USA Vice President, Charles Fairbanks. Later in her career, Sally created a similar Civil War monument for Bloomfield, New Jersey, which was dedicated on June 11, 1912- in 2001 the monument was restored by the city. 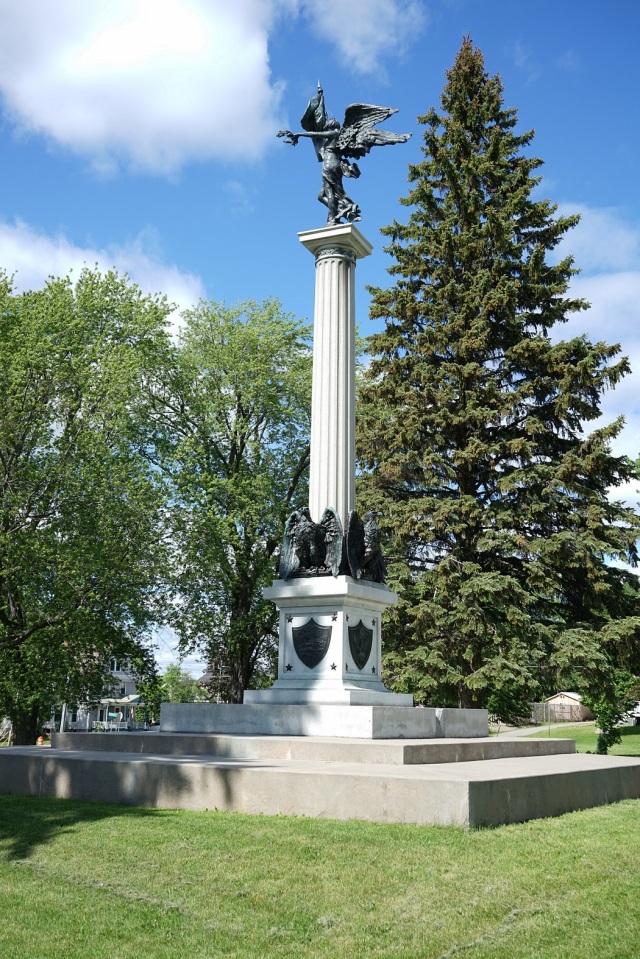 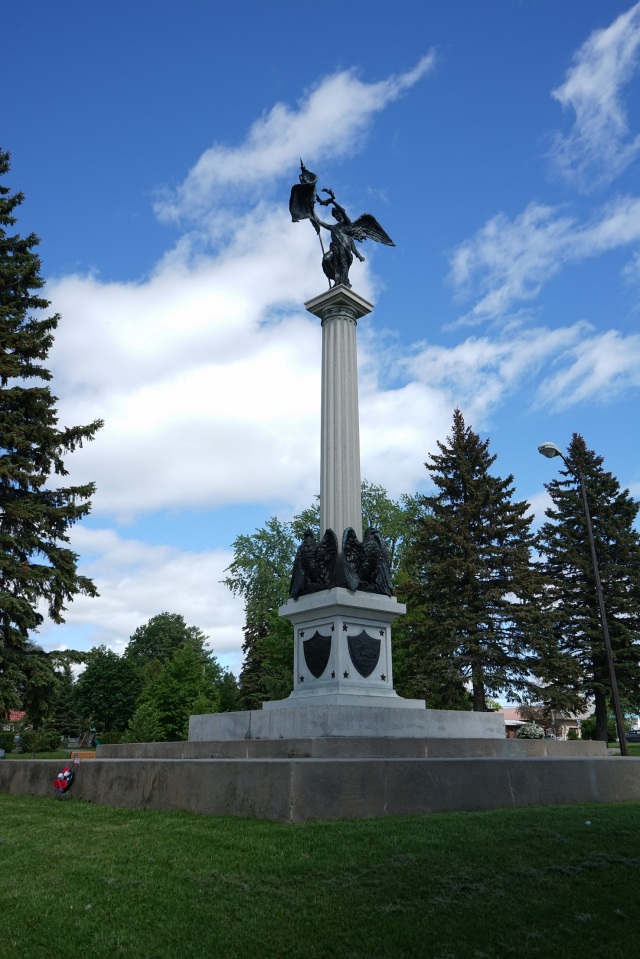 Some of Sally’s other sculptures include: The Defenders of the Flag (1908), which is a Civil War monument located in the Mt. Hope Cemetery in Rochester, NY; the Frieze of Discovers (1910) located in the Pan American Union (now OAS) building in Washington D.C.; and the Simon Bolivar statue (1921), which is located in Central Park in New York City.

The Public Library, Library Park, and the Spirit of Liberty make up a portion of the Library Park Historic District in Ogdensburg. Other contributing properties include the Remington Museum and other houses along the square block made by Washington, etc. All of these sites are easily accessible in the historic downtown area of Ogdensburg, NY. The park is also in close proximity to the riverside where there is a walking trail that leads to the Maple City Trail and the Abbe Picquet Trail on Lighthouse Point!

Picture of Sally with the Solider Sculpture: http://ww.sallyjamesfarnham.org/sallywsoldier.html

The website: http://www.sallyjamesfarnham.org/ is dedicated to all things related to Sally. Check it out!

“Laying Out New Park: Library Grounds to the Greatly Beautified by the Changes.” The Daily Journal, Ogdensburg, NY, June 10, 1904.

“The Design Accepted for the Union Soldiers and Sailors Monument: ‘The Spirit of Liberty.’” The Daily Journal, Ogdensburg, NY, July 13, 1904.

“Taxpayers to Vote on the Propositions,” The Ogdensburg Republican Journal, January 22, 1921.