Since I’ve been in Sacramento, finding time to write blog posts has been difficult, the same goes for meeting new people other than those I work with. So a way I’m kind of working on both small issues, is by joining a Meet Up group that aimed at writing! There’s a lot of Meet Ups in Sacramento for so many different interests- in comparison there are no Meet Up groups in Northern New York and I’d never actually hear of Meet Up until being in California. So for the twoish months I’ve been going to a Sunday meet up for, “Shut Up and Write! Sacramento,” where I’ve been writing and pulling a bunch of posts together. It just then takes me a while to type everything up and edit my photographs before actually posting on my blog.

It’s been nice meeting new people who are passionate about writing and it’s nice to see them weekly and see how their progress on their own projects is coming along. The Meet Up I go to is at Shine, a really cute coffee shop at the corner of E and 14th Street. I usually get the Namaste Latte (a matcha latte with vanilla and honey), it’s super good!.

So this week’s post comes to you via my hour of writing at “Shut Up and Write!” It’s been a while since I’ve done a “What is this Jargon” post and today’s topic is……..Rose Windows.

It’s not really jargon sounding, is it? You probably had your hopes up that it was going to be something crazy like oriel….maybe next time it’ll be something outrageous. Any who. Rose Windows are exciting and they’re pretty and they kind of link back to by previous post about Grace Cathedral, which has two rose windows!

So “Rose Window” is a generic architectural term- see told you! Not jargon! A rose window is a term that can be used to refer to any circular window but typically is thought of as a window found in churches constructed in the Gothic architectural style- much like Grace Cathedral, which is a French Gothic style cathedral in San Francisco. The windows are often stained glass and are usually divided into segments by mullions and tracery.

There we go, some real jargon for ya! It’s like historic preservation inception, jargon within jargon…

Let’s get back on topic. So, where were we. Rose windows can also be referred to as a “wheel window” or even a “Catherine window,” a direct nod to St. Catherine of Alexandria, who was sentenced to be executed via a spiked wheel…fun side note, St. Catherine is a martyr who was most likely made up and possibly was based on death of the Greek female philosopher, Hypatia. Look it up, really interesting stuffs. While rose windows made a splash on the architectural scene by the middle of the 12th century in France, it’s reasonable to assume that the idea of this style of window came from the Roman oculus- a large circular windows-like opening that would allow light and air into a structure. Roman oculus can typically be found on the west facade of a Roman structure. From the Roman oculus, some examples of rose windows can be found in buildings that date to the Romanesque period (10th century).

By the Gothic period in France, rose windows can be found left and right in churches and cathedrals- typically at the west end of the nave (that’s the big central aisle) and at the ends of transepts (wings on the sides of the nave). A common scene depicted in rose windows includes the “Last Judgment,” especially in the west end, while the transepts would often depict “Mary.” Bar tracery in rose windows was officially introduced int the 13th century; that’s the stonework that supports the stained glass.

So obviously, I’ve got some awesome photographs to share of stained glass windows: 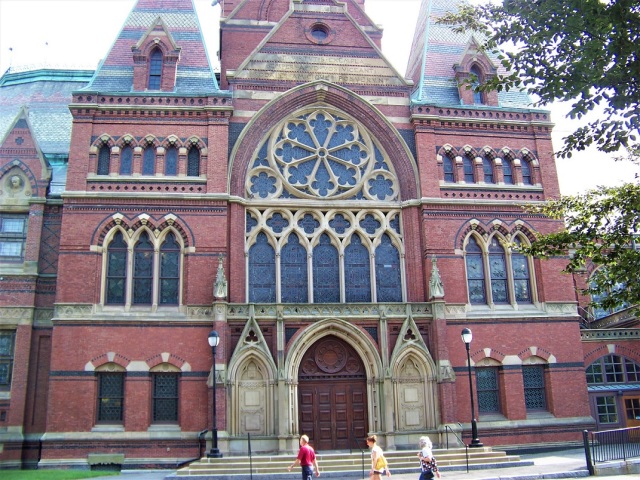 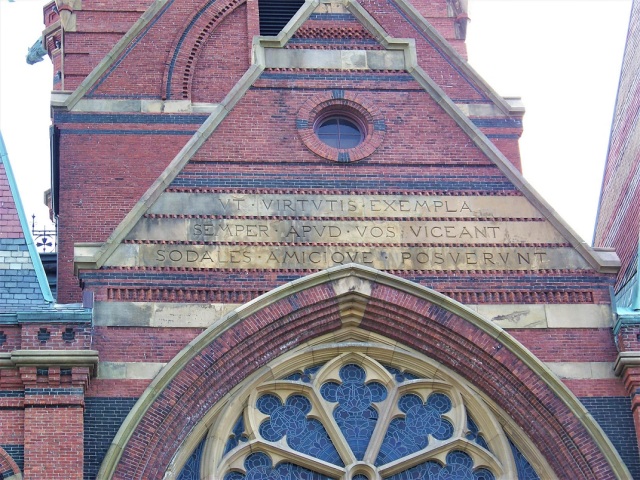 These photographs are of Memorial Hall on Harvard University’s campus in Boston. It’s a High Victorian Gothic building (Neo-Gothic is another term) that was designed by William Robert Ware and Henry Van Brunt. The Memorial Hall was constructed to honor Harvard men that had fought for the Union during the Civil War. The stained glass window measures 708 square feet and is called McDonald’s Virtues Window. Further information on Memorial Hall:

St. John’s in the Wilderness: 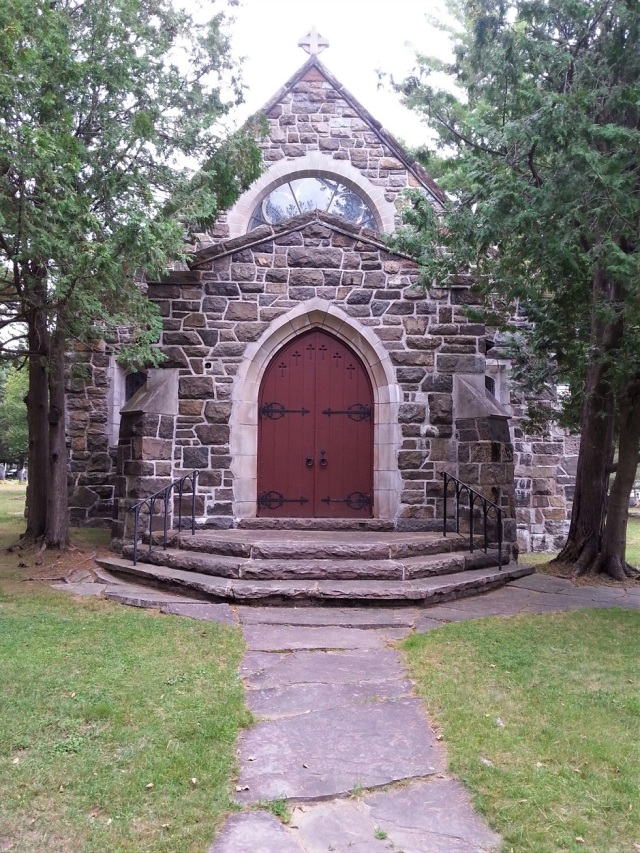 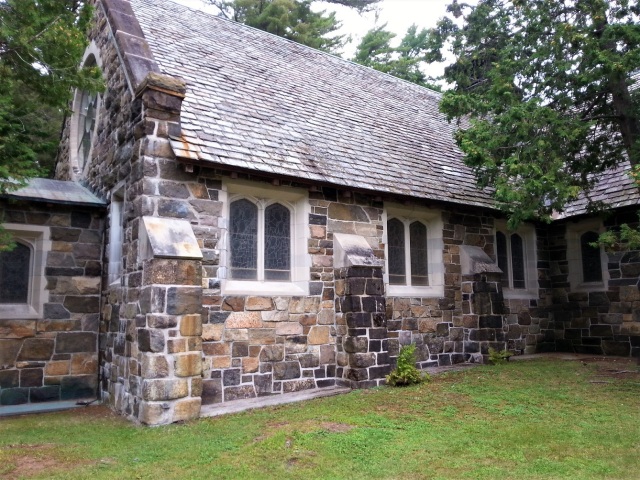 This little church is located in Paul Smiths, NY in the Adirondacks. The Episcopal Church was constructed in 1930 and designed by William G. Distin. You can only see a small portion of the rose window in the photographs but if you follow the link you can see interior images of the church: http://townofbrighton.net/sjinthew.htm 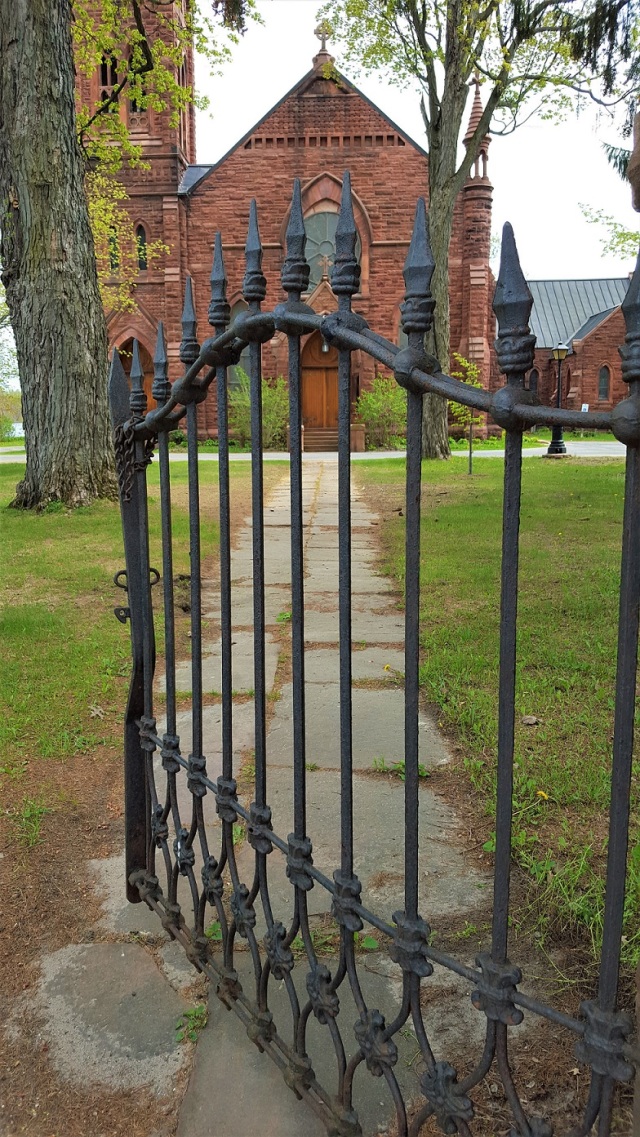 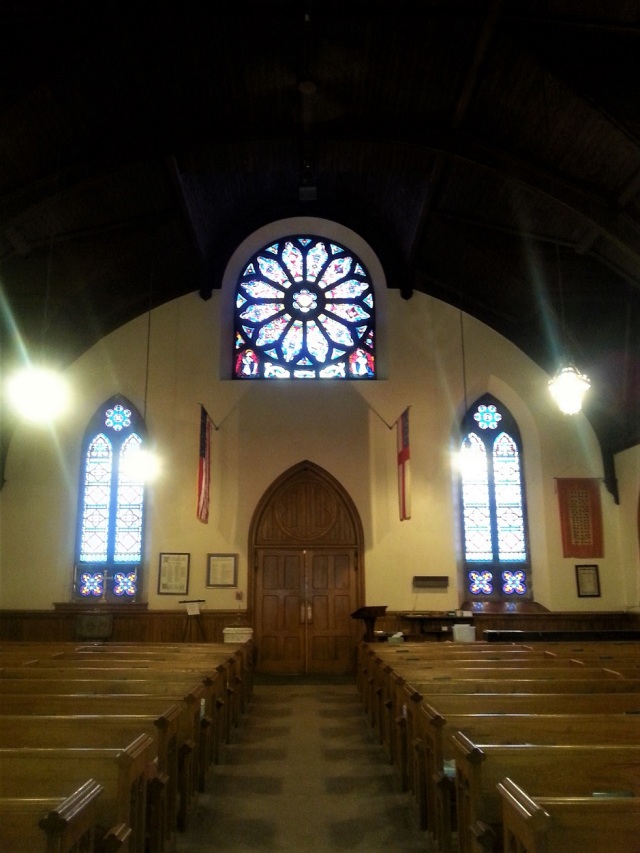 Trinity Church in Potsdam, NY is constructed of fantastic Red Potsdam Sandstone. The church was originally constructed in 1835 as a Federal style building with Gothic elements. In 1886, it was enlarged and renovated into the High Victorian Gothic style church it is today; designs were by James P. Johnson. The stained glass window was a gift of Thomas S. Clarkson and was installed in 1886; the window has many Christian symbols with a dove in the center. The church, as is many of the Potsdam Sandstone buildings in St. Lawrence County, is listed on the National Register of Historic Places. Further information: https://www.northcountrypublicradio.org/news/trinitywindows/trinitywindows.php 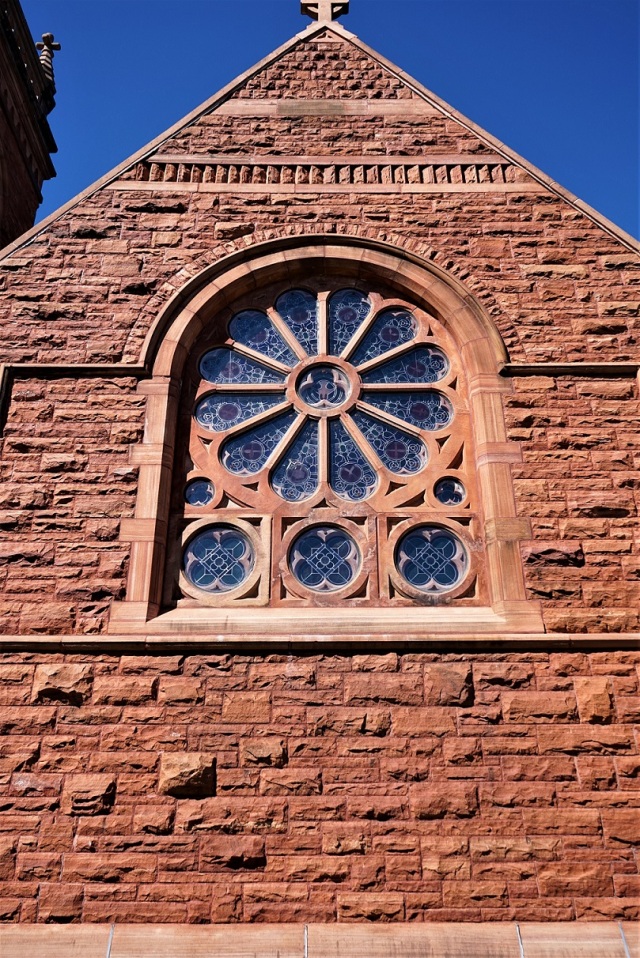 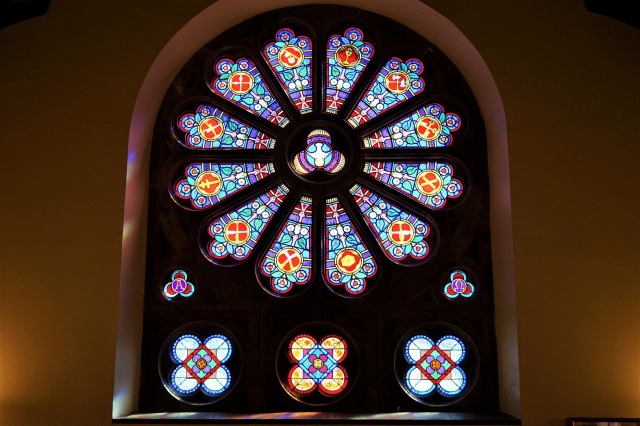 This rose window can be seen in the Zion Episcopal Church in Colton, NY. It’s also constructed of Potsdam Sandstone and it’s construction was financed by the Clarkson family in 1883. James P. Johnston also designed this church and it was inspired by the Trinity Church in Potsdam. The rose window is located in the south facade and is 10 feet in diameter. The sections of the window represent the 12 apostles surrounding a dove. The Zion Episcopal Church is listed on the National Register of Historic Places. Further information:   https://coltonepiscopal.wordpress.com/history-of-zion/ 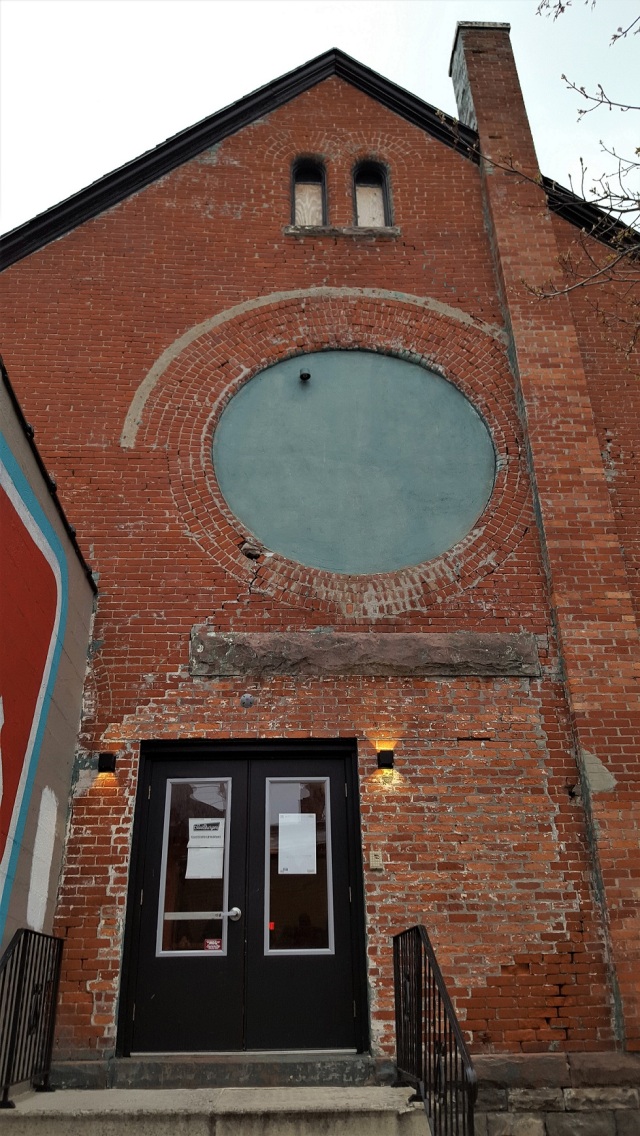 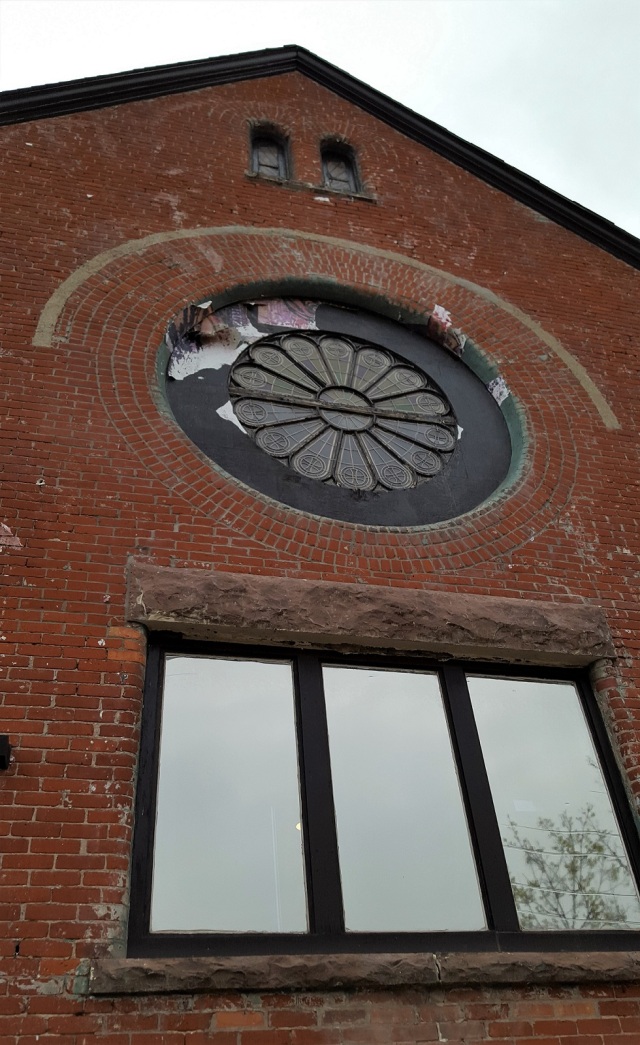 This is the former 2nd German Baptist Church in Rochester, NY; the church was constructed in 1890. Today the building is no longer a church but the home of Swill Burger. While one of the rose windows is gone, the other one still exists and helps point to the former history of the building. More information can be found about Swill Burger and the church in a previous post: 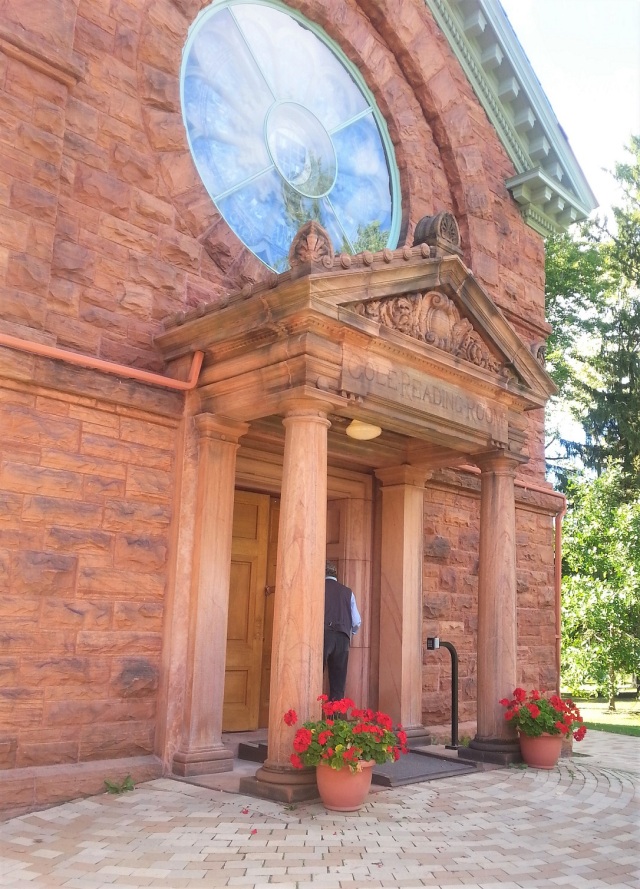 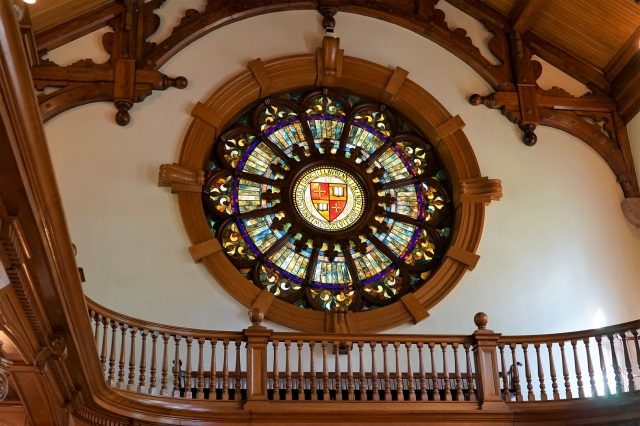 Herring-Cole Hall is located on campus of St. Lawrence University in Canton, NY. The current building was constructed in two different installments both of which are of Potsdam Sandstone. The Herring Library was constructed between 1869-1871 and was designed by the firm, Huberty & Hudson. The Cole Reading Room was added between 1901-1902 and was designed by Joseph Smith. The rose window located at the east of the hall was made by the New York firm, J. & R. Lamb and the window is of the college’s seal. The building is listed on the National Register of Historic places. Further information: http://hcap.artstor.org/cgi-bin/library?a=d&d=p1644

“Catherine Wheel” and Saint Catherine; My information came from Wikipedia but there are some sources under Note number 7 about Catherine and Hypatia: https://en.wikipedia.org/wiki/Catherine_of_Alexandria