I’m now back in Sacramento after being home for a couple of weeks on vacation. The flight back was luckily, uneventful and there was only one delay at the tiny Massena, NY airport, which didn’t impact the other flights I had in Albany, NY and Chicago, IL.

This post is going to be focusing on another single building. I’ve been doing a lot of those lately because there’s so many awesome buildings that deserve recognition plus it makes you realize that all old buildings have a great story just waiting to be told. Today’s property is, Grace Cathedral, which is the cathedral church of the Episcopal Diocese of California and the third largest Episcopal Cathedral in the county; I saw the cathedral the last time I was in San Francisco on my own. The reason I’m focusing on this property today is because it’s Martin Luther King Jr. Day and on March 28, 1964 the Rev. Dr. Martin Luther King Jr. gave a sermon during the Cathedral’s celebrations for its completion and consecration. I didn’t know that information before I visited the Cathedral; the reason I went to check it out was because it was listed as a cool place to visit at the San Francisco Downtown Hostel that I had stayed at when I was there last.

Grace Cathedral is located on Nob Hill, and it was the last place I was visiting on the Saturday and it was already late in the day- so I had to book it, which is easier said than done since San Francisco is so hilly. The hours of the Cathedral are Sundays 8-7, Thursdays 7-6, and the other days of the week are 8-6. Throughout the week there ares services and many other events going on, so if you’re interested in visiting, I would suggest double checking their website to see whats going on during your visit. For example when I arrived at the Cathedral it was around 4 pm and there were signs up saying they would be closing at 5 pm to set up for a concert later that evening.

Grace Cathedral has its beginnings with the Gold Rush of 1849- the year it was founded. The church was the “daughter” of the historic Grace Church (I assume the one located in Manhattan). The church went through a some location, building, and even name changes during its early history but all of that came to a halt thanks to the Great 1906 San Francisco Earthquake, which completed destroyed the church. After the earthquake, the family of railroad baron and banker, William Henry Crocker,** gave their Nob Hill property for a new a cathedral to be constructed on- the Crocker’s mansion had also been destroyed during the earthquake. A cornerstone was laid in 1910 but construction really did not begin for a number of years until 1927. The cathedral was designed by architect, Lewis Hobart, who designed the property in the French Gothic style as a nod to the Crocker family; a major inspiration of the cathedral is Notre Dame located in Paris, France.

During the Great Depression, work on the Cathedral completely stopped and it officially wasn’t “completed” until 1964. The interior vaulting and the cast-stone walls are actually unfinished. Other really cool details of the building is that it’s frame is raw concrete and steel, which is unusual for cathedrals. There is some pre-fabricated cast stone for decorative details and Guastavino acoustic tiles were used for the vaulting. Other architectural features that indicate its a French Gothic style building include the twin towers, the building’s cruciform plan, rose window, and the polygonal apse (I sense a number of new jargon words to explore at a later date).

Another thing to mention before I get into some of the really amazing things of the building is that there are docent led tours of the building throughout the month Since my visit was spur of the moment, I didn’t really have time to plan my visiting during a tour but Grace Cathedral has a fantastic App that can be downloaded on your phone to do self-guided tours, which is what I used when I was there. The App is the reason I learned that the Rev. Dr. Martin Luther King Jr. gave a sermon there in 1964.

Both the interior and the exterior of the cathedral are beautiful and offer a lot to see. Obviously, I had a very limited window of time to see the cathedral so I wasn’t able to see everything, luckily though a member of the Cathedral’s staff who was there closing parts of the building in preparation of the concert was kind enough to let me into the Chapel of Grace, which is the oldest part of the cathedral.

The gentleman who I think was either a deacon or verger for the cathedral stated talking to me and asking if I had visited the cathedral before. Talking with the staff member, I told him I didn’t know anything about the Cathedral and that it was the first time visiting the building but that the app was really useful for learning about the building, I also told him I didn’t know that Martin Luther King Jr. had spoke here during the Civil Rights Movement. And that’s when the behind-the-scene history adventure happened. The staff member said that he could show me the room that Dr. King prepared and got ready in before his sermon. The room is off the Chapel of Grace and I don’t think is open to the public. The gentleman told me that he believed the room was mostly unchanged since some of the furniture in the room could be seen in historic photographs of Dr. King in the same room. It was also suggested that I go check out the pulpit and that it was okay to step up into it. It was a little too much for me to do, so I didn’t mainly because I was having a lot of feelings, It was kind of like that scene in Wayne’s World when Garth and Wayne meet Alice Cooper and say, “We’re not worthy” or something along those lines. That’s kind of how I felt being told I could go stand in the same pulpit that really amazing people like the Rev. Dr. Martin Luther King Jr. have spoken from. Hopefully that makes sense.

The following are some links from Grace Cathedral’s YouTube page where they have video recordings of the Rev. Dr. Martin Luther King Jr.’s sermon:

The following area other art and architectural features of the cathedral that are amazing:

There are a ton of murals along the walls of Grace Cathedral. A number of the murals were done by Jan Henryk De Rosen, a Polish painted who lived in exile in the United States after 1939. De Rosen was born in Poland to Jan Rosen and Wanda Hantke. His father was also a painter (Polish historical and genre) who worked at the court of the Russian Czars, Alexander III and Nicholas II. As a child, De Rosen moved to Paris to live with his sisters, Maria and Zofia (a sculptor) and from there enlisted in the French Army during World War 1. After the war he moved back to Poland and studied to be a painter in Warsaw. His painting skills were very much in high demand and he painted murals within many churches and cathedrals across Europe. He came to the United States in 1939 at the request of the Polish ambassador to paint murals at the Polish embassy in Washington DC. With the outbreak of World War 2, he stayed here in the United States where he taught and continued painting.

These doors are replicas of the famed Ghiberti Doors, The Gates of Paradise. The originals were installed at the Baptistry of the Duomo in Florence, Italy. The original doors were designed by Lorenzo Ghiberti and worked on by himself, his son, and the men in his workshop, which took them 27 years to complete. In 1990, the originals were housed in the Duomo Cathedral’s museum and replicas took their on the actual building. So how does Grace Cathedral have a set of replica Italian Renaissance doors who ask?

Way back during WW2, the original doors were removed and hidden. Bruno Bearzi, the master founder and superintendent of the Florence’s art works, had them in his care where he cleaned them and had molds made with the intention of creating replicas to put in place of the originals and place the originals in a museum. That didn’t happen until 1990. But hearing that the molds and replicas existed, Grace Cathedral architects contacted Bearzi in the late 1950’s. Through the generosity of donors, Grace Cathedral was able to purchase the replicas and they were in place by November 20, 1964. The doors are made entirely of bronze with the sculptured portions finished in gold. Each door is 16 feet high, 4 inches think and 5 feet wide. Biblical events are depicted in the panels of the doors. 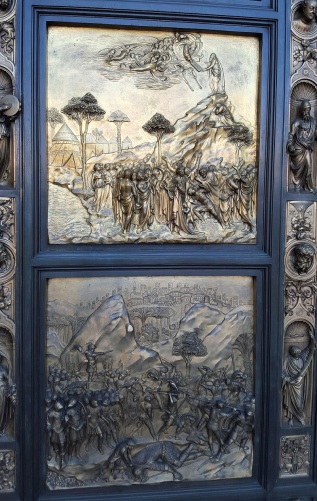 So after the wonderful and very short visit I had at the cathedral, I would highly suggest visiting it, if you’re in San Francisco. I know I would really like to visit it again and possibly join a docent led tour since there’s probably a lot I missed. Let me know what you think!

Below are some resources I used, most of the information came from brochures I collected while at Grace Cathedral and the websites helped supplement what the brochures had summarized. There’s also some links to my other blog posts that are linked to this one, like the Crocker Museum and the National Mall, which the Lincoln Memorial is part of. The Rev. Dr. Martin Luther King Jr. gave his “I Have a Dream Speech” there in 1963.

**William Henry Crocker was the nephew of Edwin B. Crocker of Sacramento whose home is now part of the Crocker Art Museum: