Recently, I traveled to Rochester, New York for my annual adventure to see my b.f.f., Amanda. While I was there, I had the opportunity to visit Mount Hope Cemetery, a rural cemetery located in Rochester. I have a fascination with cemeteries, so being able to visit Mount Hope was great. Rural cemeteries are quiet and peaceful, and I enjoy that greatly while photographing tombstones and paying my respects to those who have passed away.

Mount Hope was a wonderful place to visit. We visited the cemetery in the late afternoon and were there for a couple of hours; the weather was great! There are about 14 miles of winding roads and paths to walk along and there are many beautiful monuments and tombstones dedicated to the deceased. Amanda and I didn’t walk all throughout the cemetery but we did see a lot. To add to reasons to visit Mount Hope, the cemetery has a number of burials of historically significant people such as Susan B. Anthony and Frederick Douglass.

Douglass was born a slave in Maryland and escaped in 1838 through Delaware and Philadelphia to New York City. Throughout his life he worked for the equality of all peoples as a social reformer, abolitionist , orator, writer, suffragist, and statesman. He also was friends with Susan B. Anthony, who is also buried at Mount Hope.

In the 1830’s, there was a growing need in Rochester for more burial space. The city had been steadily increasing in population making Rochester one of the first boom towns in the country. Apparently, Rochester had a lot of firsts for the young United States of America. The growth of population and a lack of good sanitary practices within the city caused outbreaks of cholera and typhus in Rochester during this time resulting in a number of deaths. This was just one of the many reasons the city of Rochester was looking for a larger burial ground. Other reasons included the fear of possible water contamination from the overcrowded cemeteries, plus those older sites were in prime locations for industrial and commercial development.

Rochester wasn’t the only place having these of concerns with burial grounds; Europe was having them too. As early as 1711, Sir Christopher Wren of England, was advocating for burial grounds on the outskirts of town. The first landscaped cemetery was completed in 1084 in Paris and is the Père Lachaise Cemetery. The first garden or rural cemetery in the United States was Mount Auburn in Massachusetts, which was finished in 1831. Mount Auburn inspired other cemeteries across America including Mount Hope in Rochester. These types of cemeteries are typically right outside of town and are landscaped. During the 19th century garden cemeteries were built not only for burials but also for public use, kind of like a park. They have winding paths, avenues lined with tress, garden plots, framed vistas, and monuments/funerary architecture. The concepts behind these new cemeteries were that nature could help overcome the reality and grief of a loved one’s death. There was also a push during this time to be outdoors and to take in the pastoral beauty of nature. The picturesque and romanticism of nature was seen not only in landscaped cemeteries but also in art during the early 19th century.

Click through the following photos for a general idea of the landscape of Mount Hope:

This is the gatehouse at the North Gate entrance of Mount Hope. It was built in 1874.

Another hill in the cemetery.

This cobble stone road is near the North Gate Entrance of the cemetery.

The building in the photo is the 1862 chapel and original crematory. The fountain was installed in 1875 and is called the “Florentine Fountain.” Both of these can be seen upon entering the cemetery via the North Gate Entrance (there is a parking lot here.)

Sylvan Waters is a geologic formation formed by glaciers and is called a “kettle.” The kettle is a natural source of water for the wildlife that call Mount Hope Cemetery home. The 196 acres that make up Mount Hope Cemetery have been declared a certified wildlife habitat by the National Wildlife Federation.

This view can be seen on Grove Avenue where there are many mausoleums erected.

This view of the cemetery can be seen from Patriot Hill. I believe I’m looking over at the land in between Glen Avenue and West Avenue. 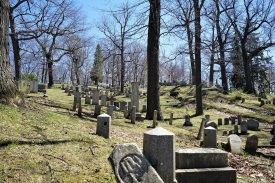 This section of the cemetery is located near the single graves and graves that had been moved from previous burial grounds. This is either looking down Pine Avenue or Buell Avenue in the cemetery.

Mount Hope was dedicated by the city of Rochester in 1838 making it one of the first municipal cemeteries in the county! The cemetery needed little landscaping because the site was already fantastically formed into the hilly, winding landscape it is because of glaciers during the last ice age. For example, Central Park in New York City is not a natural landscape- that’s all created into a park- the only natural thing about the Park is the rocky outcrops. Mount Hope did employ Silas Cornell, a landscape architect, to help layout the roads and features of the cemetery. The name for the cemetery can be attributed to William Wilson, a laborer who worked on the layout of the cemetery. In his bills that he submitted to the city for his services, William kept referring to the work as “for labor at Mount Hope.” The name was informally accepted and people just kept calling the cemetery, Mount Hope.

Most of the earlier burial grounds in Rochester were moved in 1872 to Mount Hope. There are a few of the old burials still in Rochester though, they include the sites at King’s Landing, Charlotte, and Rapids.

The following are images of monuments and tombstones that I personally thought were interesting:

The monument on the left is for Michael Filon and his wife, Sarah Van Ness Filon. Michael was a previous mayor of Rochester. The monument on the right is for Azarial Boody and his wife Ambia Corson Boody. Azariah was born in Quebec, Canada and happened to be a congressman in the United States during his life.

This monument is a memorial to all the children who died in the care of the orphanage. The Rochester Orphan Asylum opened in 1837 and took in eight children who had lost their parents to the cholera epidemic ( a reason the Mount Hope Cemetery was created). The memorial especially is for the 31 people (28 children and 3 adults) who lost their lives in a 1901 fire at the orphanage. 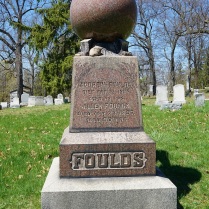 I did not find a lot about the family buried here but their monument is very unique! 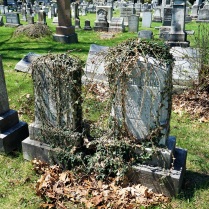 My friend Amanda pointed out these gravestones to me. It was unique that the stones had a plant connecting them.

This monument caught my eye as Amanda and I drove by it to find a parking lot in the cemetery. The quote is from Revelations 14:13 and reads: “Yea Saith, The Spirit That They May Rest From Their Labours and Their Works Do Follow Them.” 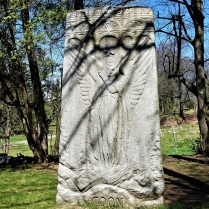 This is a monument to the Wilbur Barry Coon and his family. Coon was a shoe manufacturer during his life. This monument was commissioned from Tiffany Studios of NYC. The monument is sculpted from a slab of white granite from Bethel, Vermont because of its size, it needed a special train car to transport it from the city to Rochester.

This is the reverse side of the Coon Family Monument. The quote along the bottom reads: “The shall the dust return to the earth as it was and the spirit shall return unto the God who gave it.”

While researching Mount Hope, I came across a poem about the cemetery written shortly after it was established that was published in 1840 in the Knickerbocker. 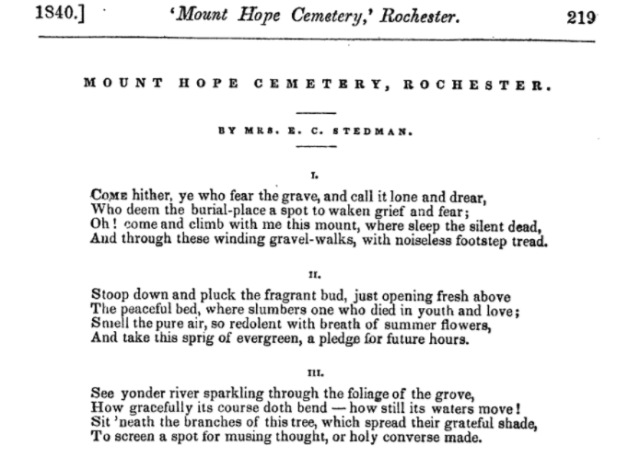 The poet was Elizabeth Clementine Stedman (1810-1889). She was a contributor to both the Knickerbocker and the Blackwood’s. During the 19th century she had three books published: Felicita, A Metrical Romance (1855), Poems (1867), and Bianco Capello, A Tragedy (1873). The last book was written during her time abroad; while traveling Europe she befriended Robert Browning and Elizabeth Barrett Browning. Elizabeth’s eldest son, Edmund Clarence Stedman, followed in her footsteps and also was a writer and a poet.

If you’re interested in seeing another example of a rural cemetery, check out my previous post about the Bayside Cemetery in Potsdam, New York:

If you have any comments or questions, let me know in the comment!

The University of Rochester has a course where students do research on monuments and tombstones in the Mount Hope. This is a link to their website where you can search to find possible research papers on the cemetery:

The following link is to a publication about the geologic history of the land that makes up Mount Hope Cemetery:

This link doesn’t have a lot of information about the cemetery but it does have some cool scans of what looks like old postcards of Mount Hope:

The quote from William Wilson came from this book, page 8.

Other information about rural cemeteries came from my personal notes from graduate school.