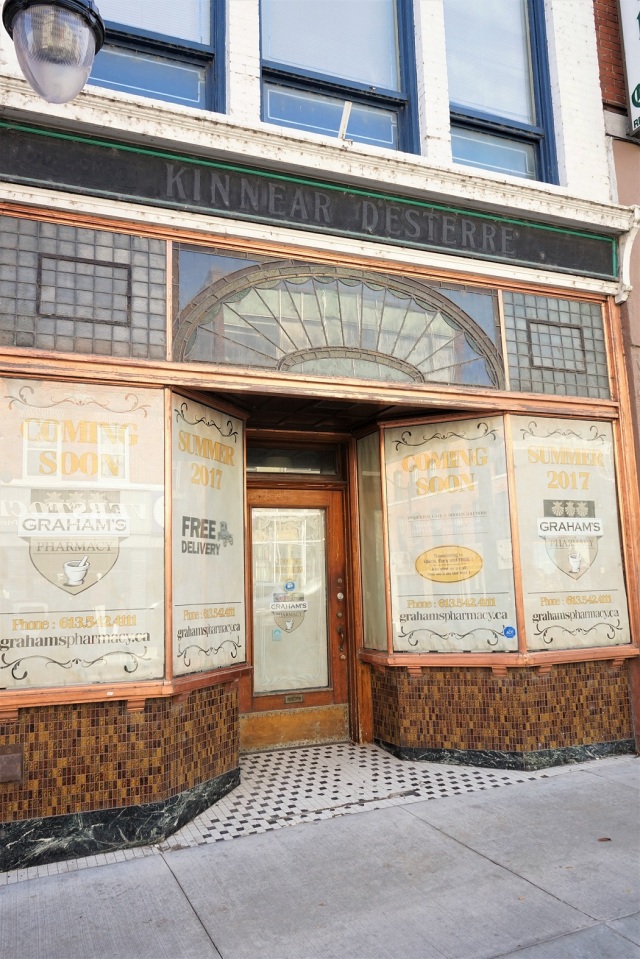 I posted this photo of a storefront on my Instagram account about a week ago. The storefront in located at 168 Princess Street in Kingston, Ontario where my dad lives. Since posting the photos,  I’ve done a little more research into the old Kinnear d’Esterre Jewelers, the shop name seen above the doorway.

It seems like the building at 168 Princess Street in Kingston was once the home to Kinnear d’Esterre, a jewelry shop, that closed down in 2004. The jewelry shop was opened in 1906, according to an advertisement from 1969.i

In Kingston’s directories, the shop doesn’t show up in the 1906-1907 Directory but Kinnear d’Esterre shows up in the 1907-1908 Directory.ii It’s very possible the shop opened after the 1906 directory was printed.

The shop originally was located at 100 Princess Street and was opened by J. C. D. D’Esterre (John Charles Duncan), who may have been a colonel in the Canadian Army during World War 1.iii D’Esterre moved to Kingston from Toronto and shortly after moving to Kingston he opened up the jewelry business. The business eventually passed to his son, John Kinnear D’Esterre, who was very well known both in Kingston and the Thousand Island region- the family also was known for boat building and John Kinnear owned a home on Garden Island.iv As already stated the shop closed in 2004 and John Kinnear passed away in 2012.

While researching the business, I found a lot of other current jewelry and appraisal shops in Kingston, seem to have connections to Kinnear d’Esterre Jewelers. For example, “Paul-Randolph Jewelers”, which opened in 1976 by W. H. Smith, is currently owned and operated by Brain Smith (son to W. H. Smith) and his son, Jeffrey. Brain Smith worked as an apprentice goldsmith with Kinnear d’Esterre when he was 18! Another shop, “Kimberly Appraisal,” is the business of Florence Kimberly, who worked at Kinnear d’Esterre from 1973 to 2004. When the shop closed, Kimberly decided to continue the “tradition of jewelry appraisal” services in Kingston that she had done while employed at Kinnear d’Esterre Jewelers.v

So while the shop of Kinnear d’Esterre Jewelers closed a few years ago, its legacy still lives on with other businesses in the Kingston area. The building luckily isn’t being demolished and is going to be the future home of Graham’s Pharmacy, a business local to Kingston, Ontario. The following is their website: http://www.grahamspharmacy.ca/about-us.php and this is a news article about the pharmacy when it first opened : http://www.thewhig.com/2015/06/26/cures-endure-at-museum.

If you have access to Ancestry.com, you can access this page and see a bunch of info on D’Esterre- there are photos! http://search.ancestry.co.uk/cgi-bin/sse.dll?_phsrc=vvQ46&_phstart=successSource&usePUBJs=true&uidh=000&rank=1&new=1&msT=1&gsln=D%27esterre&MSAV=1&cp=0&cpxt=0&catBucket=rstp&db=mediaphotopublic&sbo=t&gsbco=Sweden&noredir=true&gss=angs-d&gl=&gst=

From 1962-1963, the Advanced News, a newspaper based in Ogdensburg, N.Y. ran a number of advertisements for shops in Kingston, Ontario including Kinnear D’Esterre Jewelers:

iii The following website describes a boat that was owed by D’Esterre and indicates that the gentleman was a colonel in the Canadian Infantry during WW1: http://forum.woodenboat.com/showthread.php?178039-BROTM-of-June-Peter-Malcolm-Jardine-Congratulations.

3 thoughts on “A Storefront in Kingston, Ontario”