This is another view of what surrounds St. Stephen’s Cathedral.

This is a view of what surrounds St. Stephen’s Cathedral.

So you are literally in the city center and it smells like you’re in horse barn while you’re standing outside of St. Stephen’s. Seeing and more importantly, smelling the horses, definitely made me wonder if this is how Vienna would have smelled prior to the 20th century.

St. Stephen’s is massive! It is roughly 350 feet long (~107.2 m). It has four towers, the incomplete North Tower, the South Tower (called Steffl), and the twin towers, Heidentuerme, on the west facade. There are a total of 13 bells within the Cathedral. The church comprises of a few different architectural styles mainly Gothic and Romanesque, and it has been expanded throughout the time between the 12th and 16th centuries. 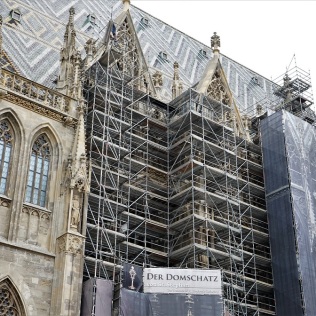 The first day by the Cathedral, I just walked around the main entry gate, which is called the “Giant’s Door” or Riesentor. I somehow managed to not take any good photos of it. Awesome, right? The Giant’s Gate and the two identical towers that surround the Gate, which are called the “Towers of the Heathens” or Heidentuerme, are the oldest section of the Cathedral. The oldest parts of the towers and gate date to around 1137 and I did get a picture of the towers.

View of the Heidentuerme, which are part of the oldest section of the Cathedral.

This is the BEST image I have of the Giant’s Gate. It does give a good view of the sculptures on the building

The exterior of the Cathedral has many stone slabs attached to it. Further research about St. Stephen’s Cathedral revealed that the church was originally surrounded by a cemetery up until 1732; some of the grave slabs became part of the building and some of the other stones are memorial slabs to various people. I think these stones are beautiful and very interesting considering I have a huge interest in cemeteries and funerary art. I also can not read German or Latin, so I have no idea what they say! If anyone had more information about these memorial slab, leave a message in the comment section below, I would LOVE to learn more about these stones. 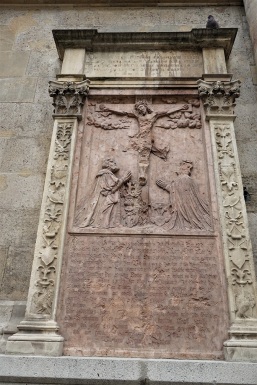 These memorial slabs are located to the left of the Giant’s Gate.

The second day by the Cathedral, it seems like a better opportunity to checkout the interior. There were a lot of visitors both outside and within the building, and I had arrived around the time that Mass had begun (or I just didn’t read signs correctly), which limited what could be seen inside because of the ongoing Mass. Either way it was tough getting good images, plus I was having a moment with my camera….I had the exposure incorrect for the first few photos. I finally got my act together and these are some views from inside the Cathedral. 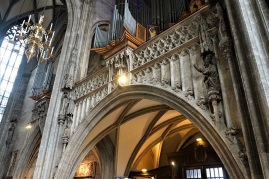 Look at those lancet arches! This is looking at interior of the area where the Giant’s Gate leads you into. 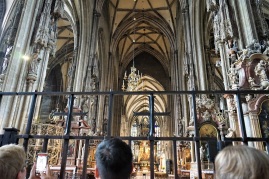 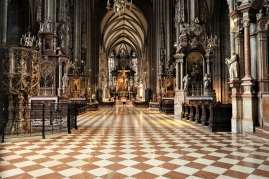 So the history of the building goes something like this….

The oldest section of the Cathedral is the west facade. This is the facade with the “Giant’s Door” and the “Towers of the Heathens.” The Cathedral stands on the ruins of two earlier churches- the first dates from 1137, this was expanded into a larger Romanesque Basilica during the 13th century (1230-1245). The west facade was all that really remained after a fire in 1258 destroyed the Basilica. The history of the names for the gate and the towers is interesting. The “Giant’s Door” is in reference to a thighbone of the mastodon that originally hung over the entryway for a very long time- it was found while digging the foundations for the North Tower. The Heidentuerme received their name because they were constructed using rubble from old Roman structures in the area.

Researching the early history of the Cathedral was confusing….no one internet source made it clear on how early the west facade was built. But using multiple sources I seemed to conclude that the west facade has remains of the earlier 1137 structure that was expanded later in the 13th century.

After the fire in 1258, Duke Rudolph IV of Habsburg initiated the reconstruction of the Cathedral into what it it looks like today. The new construction did not begin until the 14th century (around 1359 when the Nave and aisles were built), the South Tower was completed in 1433, and it continued until 1511 when all construction stopped. The North Tower was never completed; it was suppose to look like the South Tower. Until 1732, the Cathedral was surrounded by a cemetery and some of the gravestones from that cemetery became part of the building.

During the 18th century, the interior was refurbished in the baroque style. There are a total of 18 altars within the Cathedral. The High Altar, the main focal point within the church was built from 1641 to 1647 and was built by Tobias Pock. During the last days of World War 2, the Cathedral was severely damaged by fire with the biggest issue being the roof and wooden framework had collapsed. Rebuilding the Cathedral began almost immediately. By 1948, the church had limited open times to the public and by 1952, the church was fully open for public use. The roof was reconstructed using 230,000 brightly-colored glazed tiles, which were donated by Austria’s citizens. The reconstruction of St. Stephen’s Cathedral became a symbol for Austria and its people after the War. The roof’s tiles are set in a couple of different designs. One mosaic is of the Royal and Imperial Double Headed Eagle and the other is the coat of arms for the city of Vienna.

The Cathedral is currently undergoing restoration work, which includes cleaning the limestone that has been blackened by air pollution. 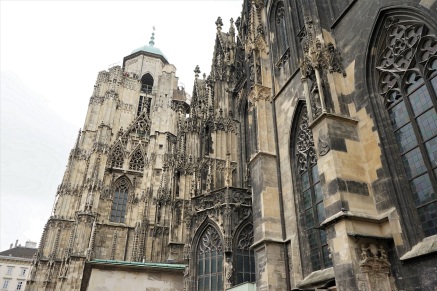 View of the North Tower. It was capped with that dome when construction on the Cathedral stopped around 1511. 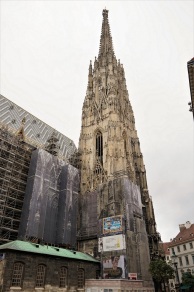 This is interesting view of St. Stephen’s. The South Tower is very white looking. It most likely has already underwent restoration. Now look at the bottom left corner of the image….that white limestone is black.

The Cathedral does have catacombs, which I did not visit. On that note, it is free to walk into St. Stephen’s but guided tours of areas such as the catacombs do cost money. Important burials in the catacombs include cardinals, archbishops of Austria, Duke Rudolph IV of Habsburg, Prince Eugene of Savoy, and Emperor Friedrich III. Mozart was married at the church in 1782. Other marriages held at the Cathedral include the marriage of Louis II of Hungary to Mary of Austria in 1515. The Cathedral has also been the location of many important funerals including: Emperor Franz Joseph and Otto von Habsburg, the last crown prince of Austria- Hungary.

St. Stephen’s Cathedral is a beautiful building with an extremely rich and living history. If you ever find yourself in Vienna, it is a place to visit. I know if I ever get back to Vienna, I would want to do the guided tours!

Thanks for reading! If you have any thoughts, let me know in the comment section below 🙂

It is difficult to create actual “Footnotes” or “Endnotes” when I have seven to eight internet sources that tell me the exact same thing…and there’s no clear author. These sources have last been accessed by myself 11/28/2016.

The most interesting internet source I used was from Wikipedia. If I haven’t said it yet, let me do it now. Wikipedia is not a good resource (that’s what I learned while in college) but of all the websites I checked out to get an idea of the history of St. Stephen’s, Wikipedia offered the most comprehensive history. I also greatly enjoyed looking at the multiple images highlighting the building expansions of the Cathedral and even the layout of the interior of the Cathedral. I suggest you check them out if you’re interested in learning more about the construction history of St. Stephen’s. Most of the other internet sources are travel and tourist websites that give general information about the Cathedral.

As already said above, Wikipedia is not always the best source to use….BUT in this case the web page has some really good graphics showing the different expansions St. Stephen’s went through. It also had the most comprehensive history of the Cathedral compared to all the above sources.