My previous post gave a small introduction into my trip to Vienna and Austria. So we can back track slightly now. The trip, at least the destination, was planned by Jake. The month’s leading up to the trip, Jake posted clues to our adventure trip on Facebook. Some might find that to be cute and uber romantic…..ugh, it was….but it was also nerve-racking because I’ve never been out of the country (Canada doesn’t count because I go there so often) and had no idea where we were going.

My flight left from Montreal, Monday October 10 at 10:00 pm, which went to Heathrow in London From London I flew to Dusseldorf, Germany, and then from there, I arrived October 11 around 5ish in the evening in Vienna. On paper I was suppose to have about an hour wait time in London from the time my Montreal flight arrived to when I needed to board the flight to Dusseldorf….this did not happen. I almost missed the damn flight because the one I was on from Montreal was late! My favorite things said during the mad rush to the next flight included the flight attendant who checks your boarding pass telling me, “So glad you arrived Ms. Doyle, we were about to start paging for you!” and the pilot announcing, “Now that we’re all aboard, we can take off.”

The rest of the flight adventure was less eventful and the snacks on the flights were good. The food on British Airways was good but by the time I was on the flight to Dusseldorf I was hungry. Very hungry. Luckily there was snack time on all of the flights, which is possibly the most important time of the day. I had some Island Bakery Lemon Melts, which were made in Scotland on the flight to Dusseldorf. Those were very good. The snack time on the flight between Dusseldorf and Vienna consisted of some sandwiches. I can’t really recall what the sandwich was made of but it had red peppers on it and cheese. It was good but again I was very hungry, so it might have been horrible.

Finally. I arrived in Vienna: hungry, exhausted, sore. But I couldn’t let that get in the way of all there was to see!

So the first full day of Vienna, a lot of walking occurred! It was easy to get to the subway from the hotel, Falkensteiner Hotel Wien, that we were staying at in Margareten, one of the districts within Vienna. The subway got us from the Margaretengürtel stop to the Stephansplatz stop, which brings you right out front of St. Stephan’s Cathedral. I’ll share more photos and information about the Cathedral in another post (probably the next one) because it’s a really awesome building with a great history.

We grabbed breakfast at a restaurant called Chilai Ringstrassen Galerien, located near the Kärntnerstrasse, which is part of the business district and has A LOT of shopping. After breakfast we walked around and ended up seeing a lot go cool things. We walked through the Stadtpark, a huge public park- more on that and other Art Nouveau architecture soon…. By walking through the Stadtpark, we ended up near the Wien River (Vienna River). By this time I needed a snack and it was cold, so it officially was break time! We stopped at a place called Urania, which had a cafe at it. The Urania was opened in 1910 by Emperor Franz Joseph as an educational facility and public observatory, and it still serves that purpose to this day. 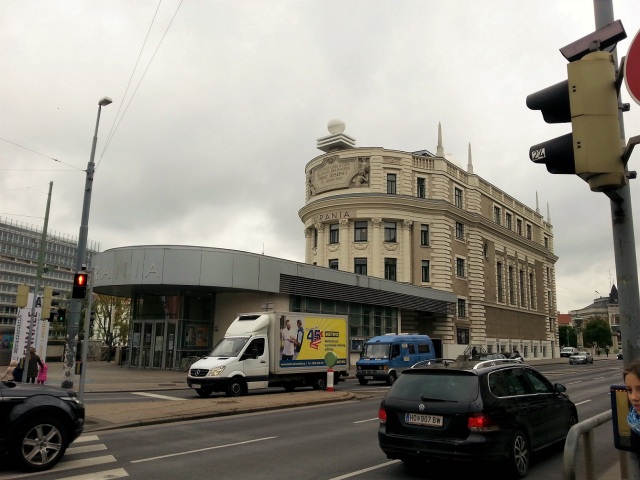 Along the Wien River there was a path, so Jake and I followed it to get us closer to the Ferris wheel.

The Ferris wheel we were headed towards is the Wiener Riesenrad (Vienna’s Giant Ferris Wheel). It was designed by the English engineer Walter B. Basset. The wheel was constructed in 8 short months from 1896 to 1897, and was officially opened to the public on July 3, 1897 during the crown jubilee of Emperor Franz Joseph (the same guy behind the Urania). Since its opening, the Wiener Riesenrad has stood as a landmark of Vienna in the Wiener Prater. 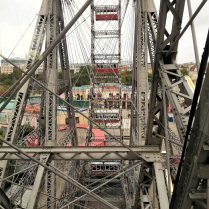 The Prater is a large public park in Vienna’s second district, Leopoldstadt. The park has a long history and was first mentioned in the historical record around 1162. Throughout its history, it had served as the imperial hunting grounds for the Habsburg family. It did not become the public leisure space its known as today, until 1766 when Emperor Joseph II opened the Prater to the people. Emperor Joseph II was the son of Empress Marie Theresa and older brother to the French Queen Marie Antoinette. The Prater does have an amusement park within it; it’s free to walk around but each ride costs money. The Wiener Riesenrad isn’t just a Ferris wheel, within the small complex for the attraction there is a little panorama museum highlighting the history of the Prater and the Riesenrad, a restaurant below the wheel, a souvenir shop, and there is the ability to rent out certain cabins on the wheel for events/parties/dates.

Walking through the Prater, the scenery changes quite a bit, it goes from an amusement park to a forested park.

From the Prater, Jake and I, walked back over the Wien River, eventually we decided to take a trolley to get closer to our original starting point: Stephansplatz. We actually got off the trolley near the Museum Quarter, an area where there are many museums and government buildings. The street we were on is called the Opernring and it turns into Burgring as it goes by a few of the Austrian museums. Walking down the street we arrived at this area teeming with life in front of this huge multi-towered building and the Habsburg Theater. Apparently a circus was going to be happening later in the evening and a number of food and drink stalls had been set up for the event. The food and drink stalls all varied in their offerings. I settled on a käsekrainer, a sausage with cheese in it and it came with a hard roll and mustard. It was good! I also got some kind of wine spritzer drink flavored with lavender syrup. The interesting part of ordering the food is that the plates and cups had a deposit on them. So you paid a small fee, like one euro, which you got back when you returned the plate or cup.

The large multi-towered where the all the action was taking place in front of was the Vienna’s Rathaus, the city hall. It was designed by Friedrich von Schmidt and constructed between 1872-1883. It’s imposing, right? It reminded me of something out of a horror film, probably because of its neo-gothic style, which used 30 million bricks and over 40,000 cubic meters of natural stone, it is construction. Adding to the imposing building effect, are the towers. The tallest measures 97.9 meters and it actually (you can’t see it) has a statue on it, “Iron Rathausmann” which means the iron city hall man….it’s also considered a symbol of Vienna. The building is still used as the official seat of the mayor, the city senate/provincial government meet there, and other municipal councils meet there too.

After dinner, we were exhausted and it was late, so that meant adventuring through the subway system to get back to the hotel in Margareten so that more Austria adventures could occur! Thanks for reading and stay tune for more posts about my trip to Austria.

Information on the history of buildings or areas have come from a combination of pamphlets I collected at different attractions and some of Vienna’s travel websites. Those websites follow:

One thought on “A Day in Vienna”