I’m currently working on a National Register nomination for a privately owned home in the Thousand Islands on Bluff Island. Bluff Island is located in the township of Clayton, New York. The property is a shingle-style summer cottage that was constructed in 1901 for a family from Pittsburgh, Pennsylvania. The family, the Robinson family, lived on the island every summer until 1948 when, Anne Holdship Robinson, the last owner of the home passed away.

This seemed like a great opportunity to show off some wonderful images of shingle-style homes I’ve seen throughout my adventures. Looking through my photo collections, I realized almost all of my images of shingle style properties are located in the Thousand Islands, which is unsurprising because the style is commonly found in seaside summer resort areas such as Newport, Long Island, Nantucket, Martha’s Vineyard, and the Thousand Islands.

The shingle-style, which is sometimes considered the “seaside style,” evolved and borrowed elements from other 19th century architectural styles such as Queen Anne, Colonial Revival, and even Richardsonian Romanesque.i

These shingle-style homes were typically built as summer cottages for America’s elite who had the means to build homes that would only be lived in a few months of the year. Architects who received commissions to design these homes included McKim, Mead, and White, H. H. Richardson, and William Ralph Emerson.ii

These architects designed homes that varied greatly because of the influence of elements from Queen Anne and Colonial Revival styles: porches, asymmetrical massing, gambrel roofs, columns, Romanesque arches, irregular shapes, and towers could all be seen on Shingle style homes.iii The key element that hold all of these architectural parts together, are the extensive use of wooden shingles for exterior cladding. The use of the wooden shingles created a sense of a smooth, uninterrupted surface of these massive, irregular homes without getting caught up on the details.iv

The following images highlight a number of shingle-style buildings I have seen in the Thousand Islands and there is one home located in Potsdam, NY that does incorporate shingles. 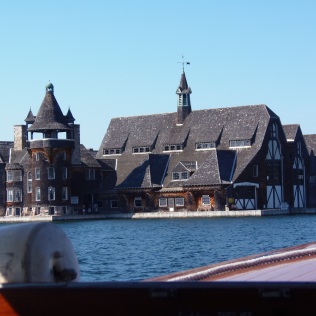 This is the yacht house of Boldt Castle. The yacht house is located on Wellesley Island. It was designed by Philadelphia architects, G.W. and W.D. Hewitt in 1903; it is listed on the National Register of Historic Places. It features many typical architectural elements that are commonly seen in shingle-style buildings constructed during the Gilded Age.

This home is a summer cottage located in Thousand Island Park on Wellesley Island.

A Napa Auto Parts store that is clad entirely of shingles. It’s a fun example of a shingle-style building that is not a home. This building is located on James Street in Clayton, NY.

This house is located in Potsdam, NY on the corner of Leroy and Pleasant Streets. I don’t know a lot about the history of the home but I consider it a local example of the shingle-style. The second and third floors are clad in shingles.

Another example from Thousand Island Park on Wellesley Island. The Park is a historic district listed on the National Register of Historic Places and consists of many different styles of summer homes.

If you have any awesome shingle-style homes in your neighbor share them in the comments below!

i. Mark Gelerneter, A History of American Architecture: Buildings in Their Cultural and Technological Context (Hanover, NH: University Press of New England, 2001), 181.